Food Trucks in the Business Commons? 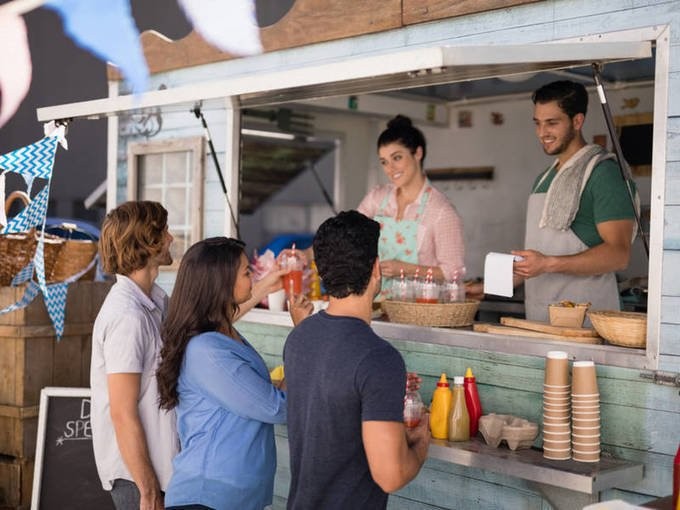 Newtown Township’s OLI/LI district, which includes the Business Commons, is in trouble. This district is currently zoned for light industrial and office use. It seems that after COVID there is much less demand for these uses as many businesses downsized and more employees are working from home.

In addition, there are many vacancies that have not been rented. Back in 2010 it was reported that businesses in the Commons employed 13,000 workers. It is certain that this number is much less these days and the Economic Development Committee (EDC) was formed specifically to find ways to bring new businesses to Newtown – and specifically to the OLI/LI district.

Consequently, on the advice of the EDC, Newtown Township hired the Bucks County Planning Commission (BCPC) to develop an “Overlay Zone” in the OLI/LI district that would allow more uses in certain areas of the district (read “Newtown Township Supervisors Discuss Ways To Attract New Business to the Newtown Business Commons District”; see map).

Overlay Zoning is a regulatory tool that creates a special zoning district, placed over an existing base zone(s), which identifies special provisions in addition to those in the underlying base zone. View this video: Newtown Township LI/OLI District Overlay Concept

Back in May 2021, before BCPC was hired by the township to develop an overlay, Township Planner Michele Fountain suggested several specific uses that could be part of the plan as shown in the table below.

The BCPC has since narrowed this list down to the following uses:

Of all the proposed uses, I am most concerned about “Eating Place.” First, we have many eating places in Newtown and residents are getting weary of seeing them come and go – but mostly keep coming along with parking and traffic issues.

Nevertheless, there is a push from some people – mostly real estate developers – to provide eating places within the Commons. A drive-through eating place was suggested at a recent NTPC meeting as a means of providing food for office workers in the Commons who have limited time off for lunch.

But a drive-though eating place seems to go against the current plan to build more sidewalks in the Commons to promote “walkability” rather than increased vehicular traffic. The township received a $873,000 grant to construct sidewalk connections in the Business Commons area (read “Newtown Wins $873,000 Multimodal Transportation Grant”).

Also, since the proposed new uses are meant to make the Business Commons more competitive in attracting new businesses with high-paying jobs, a drive-though eating establish would just be another Wendy’s or McDonalds – neither of which are known for high-paying jobs.

In my opinion, food trucks offer an alternative. They are easily accessible on foot and also convenient for office workers with limited time for lunch. Currently, the Newtown Brewery located on the outskirts of the Commons on Penns Trail, offers food truck services during happy hour (4-8 pm) on several week days (Weds, Thurs, Fri) –  and longer hours on the weekend. This is allowed by the township because the brewery was not permitted to have its own food preparation whereas patrons are free to bring in food from outside (read “Craft Beer Brewery, Food Trucks and Fun Coming to Newtown Commons This Summer”).

So, there is some precedence for food trucks in the Commons. In fact, several years ago a supervisor suggested that this might be a good idea. That idea, however, never moved forward. Now that we are committed to creating an Overlay with new uses, however, it may be a good time to revisit that idea.

How To Implement This Idea

Currently, there is no Jointure ordinance that allows food trucks to operate in the Jointure, let alone in the Business Commons. The Borough of Milvale, PA in Allegheny County, however, has such an ordinance entitled “Mobile Food Vendors”. Perhaps it can be used as a model for the Jointure.

Milvale’s ordinance defines a “Food Truck” as “a motorized vehicle which may, upon issuance of a permit by the Borough of Millvale and conformance with the regulations established by this article, temporarily park upon a street and engage in the service, sale or distribution of ready-to-eat food for individual portion service to the general public, directly from the vehicle.

The Milvale ordinance allows permits for an area on private property to accommodate two or more food trucks. This would be the appropriate kind of use for food trucks in the Business Commons. Any Jointure ordinance governing food trucks should limit this use to the Commons area and limit the hours of operation to weekdays around lunchtime so as not to compete with the Newtown Brewery.

What Will It Take To Do This?

First, realize that there is no profit that real estate agents can make from this idea as opposed to traditional “eating” establishments – drive-thru or otherwise. They will oppose this idea and they have deep pockets to do so.

There is good reasons for opposing the development of brick and mortar eating places. For one thing, as mentioned above, it’s not likely that office workers in the Commons would have time to sit down for lunch at a traditional eating place. That was one reason for the idea of drive-thru eating places, which have their own set of problems, which I already mentioned.

In any case, I like the idea of food trucks, which offer Business Commons workers & nearby residents variety as well as convenience. This new use does not increase traffic, but encourages walkability, which is the major goal of constructing new sidewalks in the area. In addition, if there are more opportunities for food trucks in Newtown, it can only help businesses like Newtown Brewery attract food trucks and enhance its business.