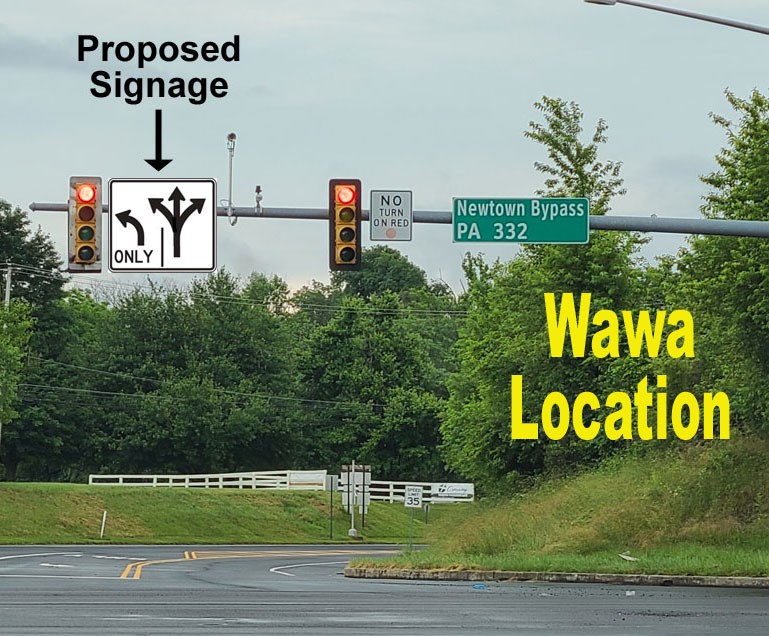 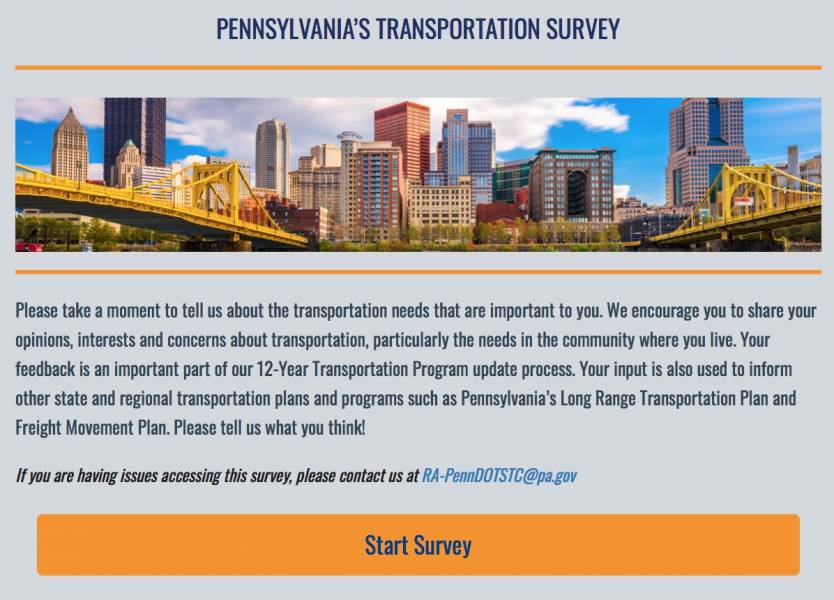 The following is an email message sent to the Newtown Township Supervisors and several other elected officials from Fred Kachuk, a concerned Newtown Twp resident.

This is an opportunity to comment about those daily annoyances that you would like to have fixed. I’ve submitted several comments online, and below are two which may also interest you.

Several years ago the Bypass was upgraded and expanded; an additional northbound lane was added to accommodate the large increase in traffic flow. The traffic noise here is above safe limits for the residents of Newtown Place and Chandler Hall, many which live within 100ft. of the Bypass. I’ve also contacted the Newtown Police Dept.(never responded) regarding the constant clatter from truck ‘brake-retarders’.  We need sound barriers.  In 2015 State Senator McIlhinney and State Representative Santarsiero submitted this request to acting PENNDOT Acting Secretary Richards.  I’m not aware of any further progress on this matter, and would appreciate an update.

Several thousand people live within a few hundred feet of this 3.5 mile corridor along with many very busy public and private properties, including:

"I expect PENNDOT to look closely at options for improving this situation," said Mr. Kachuk. "In addition to new signaling, crosswalks or bridges, I would suggest contacting the George School.  It might be possible to reach an agreement with them to allow public access to their pedestrian bridge*, or allow PENNDOT to add public entrance ramps to the bridge."

*My comment: Now that Arcadia will be building 70 homes at the intersection of Buck Road and the Bypass (read Newtown Township Supervisors Approved a Settlement Agreement with Arcadia), it may be a good idea to add a pedestrian bridge at that location. Just sayin'.

PennDOT to Lower Speed Limit on Section of Swamp Road

In a May 2, 2019, letter, Ashwin Patel, Senior Manager of PennDOT's Traffic Engineering and Safety Division, notified Newtown Township that PennDOT will be lowering the speed limit on Swamp Road between the Twining Bridge intersection and the intersection of Pennswood Dr. (entrance to Knob Hill) to 40 MPH from 45 MPH (see map below). 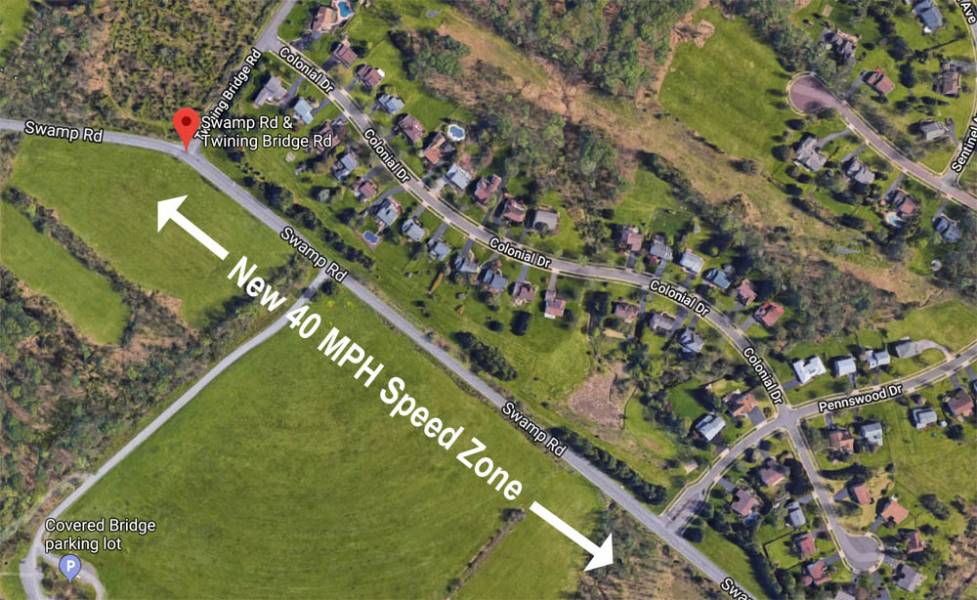 Recall that at the September 12, 2018, BOS public meeting representatives of PennDOT District 6 answered questions and concerns about Swamp Road from Newtown residents and Supervisors. At that meeting PennDOT Mr. Patel answered questions about lowering the speed limit on sections of Swamp Road (see video below).

85% of vehicles approaching the intersection were already traveling at 39 MPH.

PennDOT, however, determined that an all-way stop is not warranted at the intersection, noting that several improvements were made to signage, curvature of the road, and the overall visibility of the intersection last year at the request of the Township.

To implement an all-way stop control, appropriate engineering parameters are evaluated which included an analysis of "reportable" crash reports (specifically angle crashes) occurring at the intersection , an on-site review where roadway alignments and sight distances are observed, and traffic volumes. Based on all engineering parameters reviewed , the Department cannot justify the installation of STOP signs on Swamp Road.

$1.6 Million Available for Traffic Improvements BUT It Can't Be Spent! 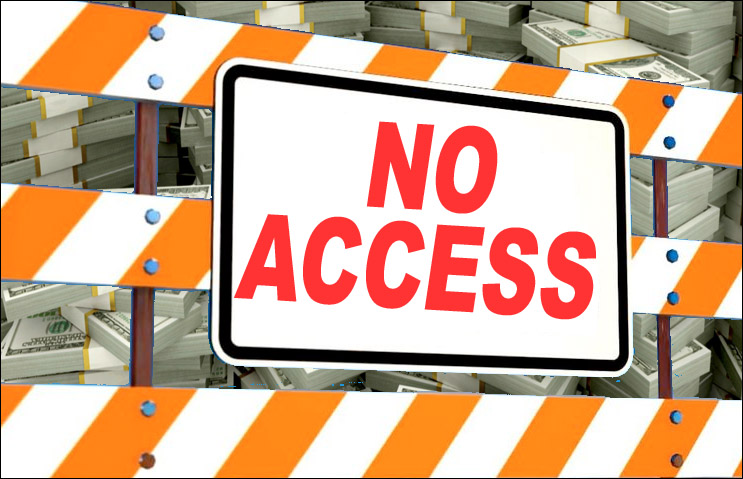 Whenever new residential or business developments are proposed for Newtown, the impact on traffic is a major concern of residents (read, for example, “Newtown Board of Supervisors Shoots Down Drive-thru Starbucks” and “Super Wawa Survey Comments” and “Arcadia Green Development Hearings”).

Currently, Newtown has accumulated approximately $1.6 million in traffic impact fees but is unable to use those funds because it lacks an updated capital improvements plan, which is necessary for the use of those funds.

During the 2019 Budget presentation before the Board of Supervisors (BOS) on October 15, 2018, former Newtown Township Manager Kurt Ferguson brought this issue to the forefront. He discussed the urgent need to form a Traffic Impact Fee Advisory Committee (TIFAC Definition) in order to utilize the $1.6 million already collected from developers (see the video below).

As Mr. Ferguson mentioned, in order to utilize these funds, a transportation capital improvements plan must be prepared and adopted by the Board of Supervisors (BOS Definition) to the enactment a necessary amendment to the impact fee ordinance.  According to the procedures, provisions and standards set forth in Act 209, which allows the collection of impact fees, the township must create a TIFAC to develop the transportation capital improvements plan.

Is There a Need?

According to the PA “Transportation Impact Fees Handbook”, impact fees can be used for capacity improvements to accommodate traffic generated by new development, but not to address existing or anticipated deficiencies unrelated to the development.

“As a general rule,” according to the Handbook cited above, “for impact fees to be an effective funding tool, potential should exist for development of at least 50 to 100 residential units per year and approximately 50,000 to 100,000 square feet of non-residential development per year for a minimum of five years. Municipalities that are near build-out or do not expect significant growth due to current zoning, economic conditions, environmental features, or preserved lands generally do not benefit from impact fees.”

The TIFAC must be comprised of 7 to 15 members. Although an even number of members is permitted, an odd number is recommended to avoid tie votes on recommended actions to the governing body. A minimum of 40 percent of the TIFAC must be made up of real estate professionals, developers (commercial and/or residential), and building industry professionals that live or conduct business in the municipality.

The remaining 60 percent must be residents. It is desirable to have people with municipal planning experience serve on the committee, such as people who serve on the planning commission and/or other committees. However, municipal staff may not serve on the TIFAC.

Planning Commission Can Act as TIFAC

According to the PA “Transportation Impact Fees Handbook”, a municipality may appoint its Planning Commission as the TIFAC, provided that the 40 percent requirement is met. “If this cannot be met, appropriate people must be appointed to serve as ad hoc voting members of the advisory committee when the planning commission acts as the TIFAC.”

If you are interested in serving on this Committee, please submit a letter of interest and resume to Olivia Kivenko, Newtown Township, 100 Municipal Drive, Newtown PA 18940, by email to oliviak@newtownpa.gov or by fax at (215) 968-5368.

Recently, a resident of Frost Lane complained to the Township about speeding traffic on her street. As you may know, Goodnoe School is located on Frost Lane, which the resident dubbed “Frost Freeway.” It’s a 25 mph zone and during certain school hours the speed limit is 15 mph. So any speeding on that street is a concern.

When I made an inquiry regarding this issue, Kurt Ferguson, the Township Manager informed me: "Typically these traffic issues are investigated by our staff.  We have the ability to measure traffic speed, total cars, as well as looking as site lines, etc. Typically this would be assigned to staff to investigate and to report results to the board."

Within a few days, the Police Department performed a “stealth stat” survey of the traffic flow on Frost Lane. Mr. Ferguson described how this is done at the March 14, 2018, Board of Supervisors meeting:

Some of the results are summarized in the following charts: 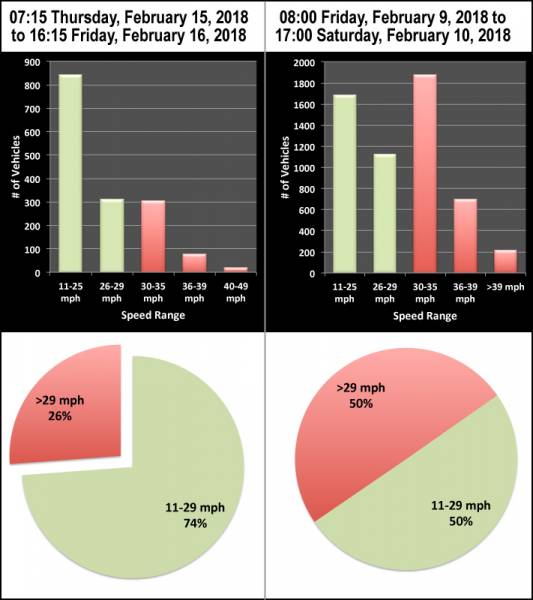 Here are some more details:


Mr. Ferguson said the Township will do speed enforcement on selected Saturdays and during the 15 mph school zone speed limit as well.

UPDATE (June 6, 2018): According to Mr. Ferguson in the full report, "The two (2) signs most in need of replacement are the School "Speed Limit when Flashing" signs. Those signs are the responsibility of the school. I spoke with Doug Taylor from the school district. Council Rock is planning to update these signs throughout the Township. I would anticipate that these will be upgraded by summer."

Yesterday, I noticed that these signs have been replaced as shown in the photos below. 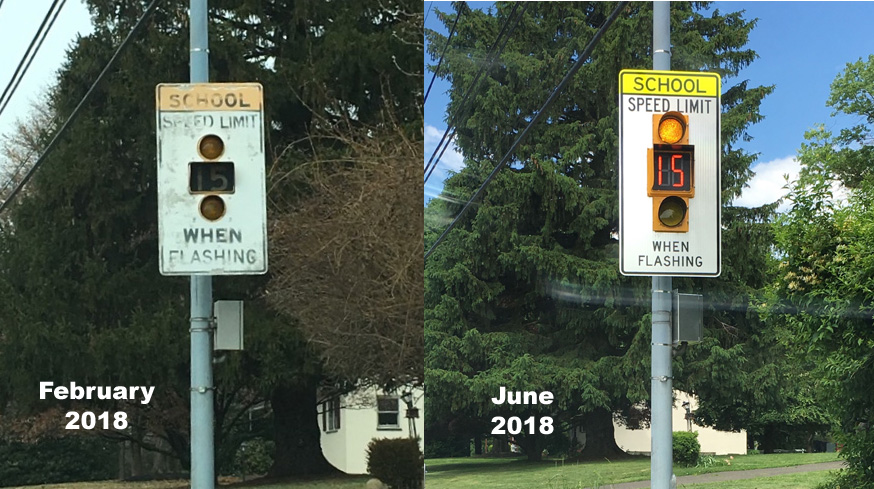